I thought about not making a Bloom Day post this month. Right now I have the same things blooming that were blooming last month. So I decided to try to photograph my continuing orchids in a different way and happily there are a couple other things blooming too. Such as... 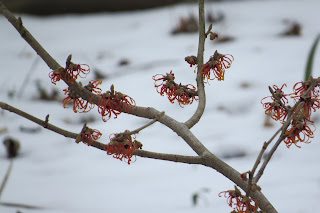 This witch hazel Diane. She is blooming up a storm despite the cold and snow. I might have some snowdrops blooming too but they are under snow right now. 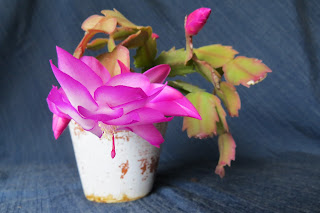 This crazy little Thanksgiving cactus is once again blooming. It had it's most buds and blooms when I first brought it inside this fall. Then it has bloomed twice more. Not so many but it always puts a smile on my face to look over at this little plant and see a huge floresent bloom popped open. 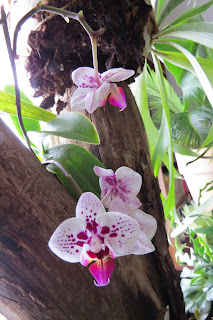 This white with pink polkeh dotted bloom orchid is a tiny plant. I bought it last year to decorate a fairy garden I made. The fairy garden proved to be too big to keep on display in my home so I dismantled it and tucked this small orchid into the crotch of this limb that I have mounted the Staghorn fern onto. I hope they all three take hold of this limb. 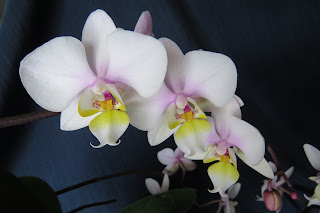 My last new bloom is this orchid that has a yellow throat. The white and yellow of this orchid seem so pure. I couldn't quite capture it as I would have liked to. There are so many blooms on this orchid. Twenty one blooms and even more buds, but who is counting.  I should have taken an overall shot. 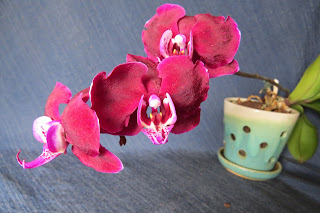 This orchid was blooming last month. It has a big sturdy stem and healthy plant but only three blooms. They are quite striking though so I forgive it for having so few blooms. 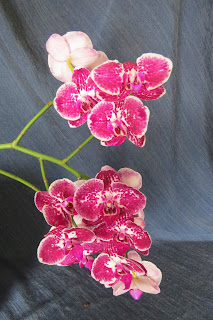 The last orchid is the orchid that has been blooming the longest. It started blooming before I brought it in for the season. It has continued to bloom. I am seeing that the color of the flowers are beginning to fade. 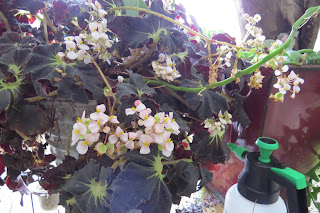 The last plant blooming is one of my favorites. It blooms so prolifically without much encouragement. The Black Truffles Begonia.
So if you are tired of looking at the same ole blooms or you live in an area that doesn't have any blooms at this time of year head over to Carol's May Dreams Gardens blog to see blooms from all over.
You can also share your blooms with us. I would love to see them.

Posted by Lisa at Greenbow at 1:57 PM 17 comments: Links to this post 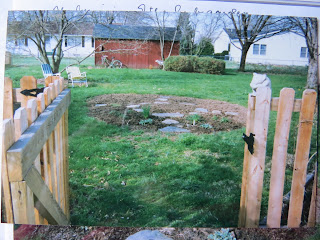 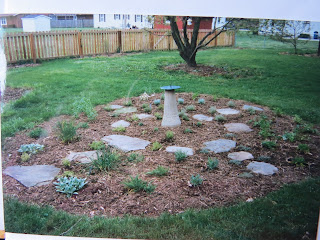 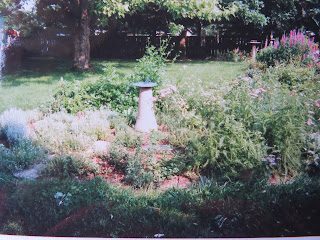 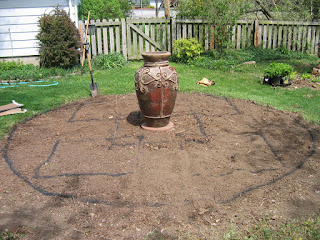 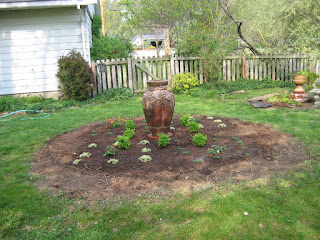 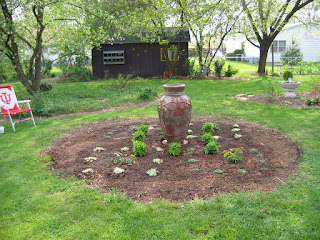 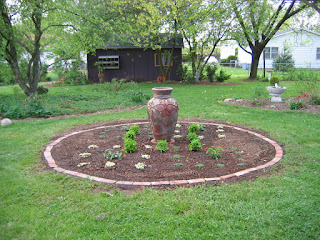 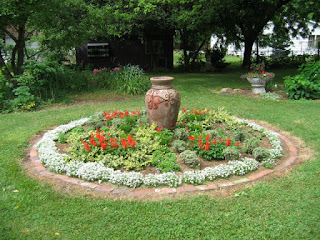 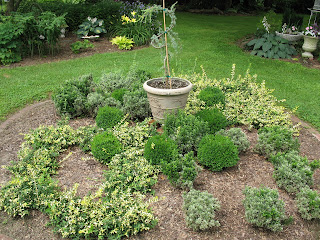 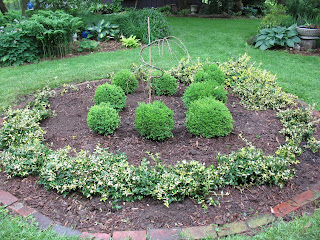 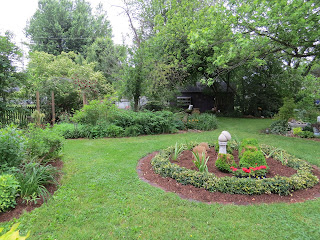 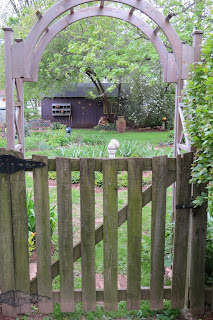 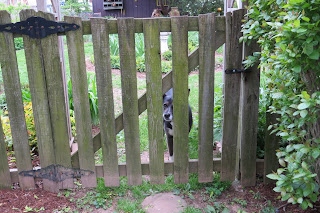 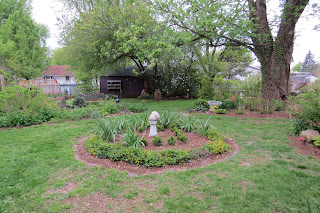 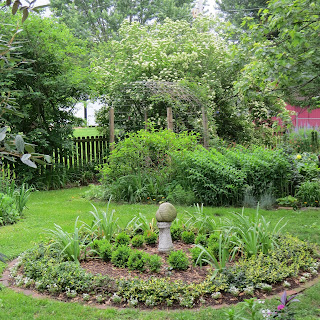 
Posted by Lisa at Greenbow at 3:08 PM 16 comments: Links to this post

Last month I did my ritual start of my garden journal. I often start my journal with a quote, drawing, some kind of inspiration for the garden. This year it was stamps and the word that FB gave me in one of those quizzes that you fill out for fun. Future was the word that came up for me. I thought that was appropriate since I retired the end of January and I have a 'no routine' future to look forward to. I usually end up with a few pages at the end of my garden journal that are empty. This year I hope to be busy enough to have all sorts of projects and observations to record here so I can fill it to the end pages. I have kept the same type of journal since 1996. So this will be quite the quest. 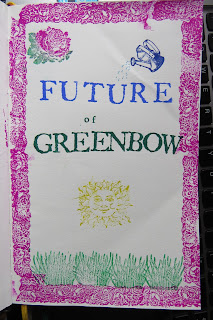 A couple of weeks ago when the snow began melting my mind started swirling with ideas.  I have plenty of fodder for my new journal. 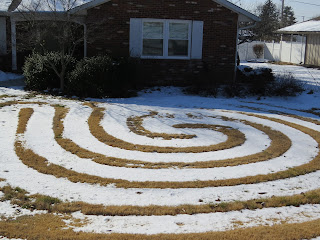 The past couple of days have been nice winter days. Any day during winter when the temperatures are in the upper 40s or 50s I just have to get out and do something in the garden.  I did some trimming of some shrubs, cut back the perennials along the west walk. It looks better along that area of the garden. It really needed cutting back because you couldn't walk through that part of the walk without bushing up against half rotten stems. EEEwwwww. Even the meter reader will appreciate this effort. 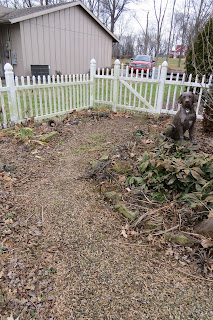 The future of my garden is also in flux. I have so many ideas I want to try. I want to revamp almost every bed in my garden. I am torn as to which way I should turn. I want more conifers in the garden, more native plants, more edibles. I can't resist many of the flowers of the summer season too. Needless to say I will have a lot to do besides the regular maintenance. 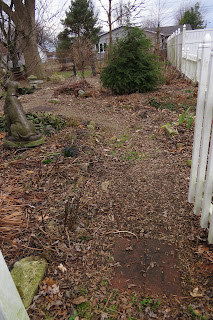 As I open the gate and look back through the garden you can see a shot of green here and there. Other than the Hemlock and yew most of that green wouldn't be visible at this time of year but what with the warmer temperatures at the end of last month and the beginning of this month the early greens are popping out of the ground. 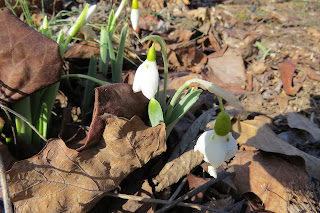 Green and brown is about it at this time of year, however the snowdrops are flouncing about in the wind. They don't need much encouragement.  They are so cheerful even though they are bashful with their flowers and are always glancing down. 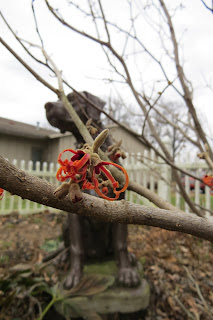 Diane Jelena is starting some blooms but they are so low to the ground that you have to be flexible to get down there to catch a glimpse of them. I am tempted to cut off those stems and bring them inside. (Thank you Brenda for reminding me that this is Diane instead of Jelena.) 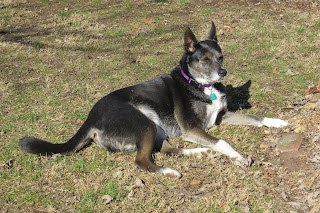 Annie and I hope you are able to get out in the garden some this winter. She must oversee anything that goes on in the garden of course.  Do you have any garden thoughts to share with us at this time?
Posted by Lisa at Greenbow at 4:34 PM 16 comments: Links to this post