Gail at Clay and Limestone has a meme for the 4th Wednesday of each month about the wildflowers in your garden. I often like to participate and I hope you will too.  This month I am cheating a little bit because I saw a sight I just had to share with some of you that appreciate wildflowers. 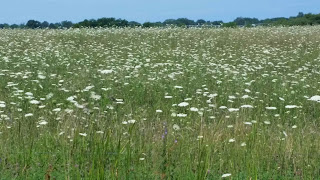 While out driving through a mine reclamation area we found a couple of miles of fields full of Queen Anne's Lace. I realize it is an introduction to the States but it has been around so long that most people consider "one of ours".
It was quite a sight. It appears as a monoculture but if you look closely there are some other colors in this mix. A tall purple thing in front and some clover mixed in. This area of the reclamation has been used for cattle grazing and there are farmers making some of this into crop fields.
It wasn't only the plants that drew us here. It is a place where there is enough space unmown and not used for agriculture that there are specialty birds to seen. 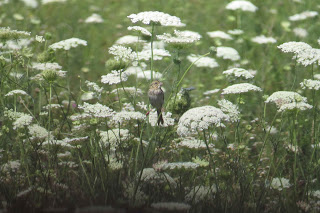 This Henslow's Sparrow is one of the most rare sparrows in Indiana. It is actually becoming rare in many places. It needs this type of area to breed in. 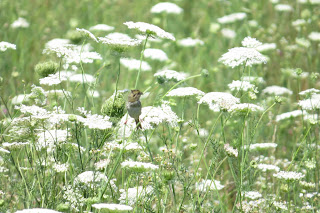 While driving down the road we saw at least four of them in this area. 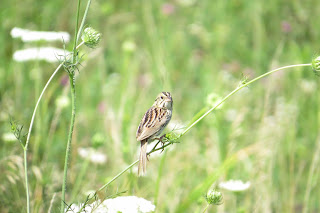 Please excuse the quality of pictures. It was high noon and the bird was really out of range for our little camera. 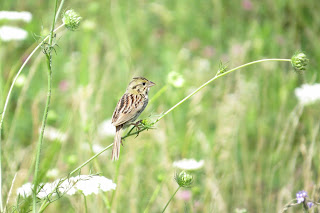 I was so thrilled at finding such a large cache of these sparrows I wanted to sing along with this lusty male defending his little swathe of territory. Now when I say large cache, I meant there were four of these sparrows that we saw/heard here. You don't find them in many other places in the state. 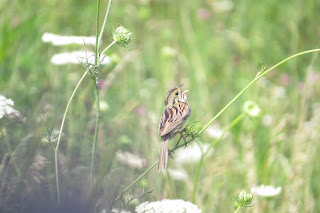 Grasshopper Sparrow and Upland Sandpipers also nest in this area. We also saw and heard several Grasshopper sparrows, it is a rare sparrow in Indiana too. The Upland Sandpipers weren't to be seen at this time of day. It just means another trip to try to see them.
This goes to show that we need places where the wildflowers can grow to sustain the wildlife that we all love not to mention our selves.
Happy Wildflower Wednesday.
Posted by Lisa at Greenbow at 6:00 AM 24 comments: Links to this post

While looking over the garden today it was clear to me that the most striking things blooming in the garden were the Lilies.  I need more lilies. 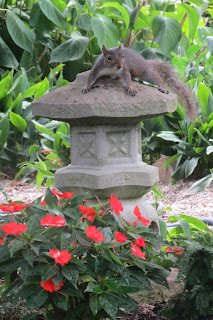 Of course they weren't the only things blooming. 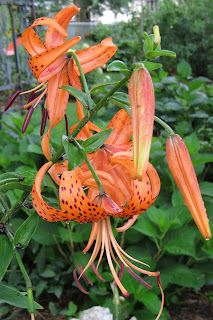 Tiger Lily 'Splendens'
They just seemed to be the only flowers to not appear to be too stressed out from the lack of rainfall. 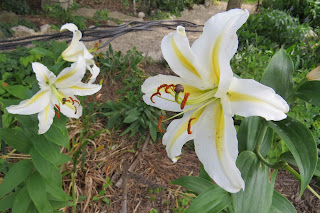 Oriental Lily 'Legend'
Of course I have watered but it just isn't the same. 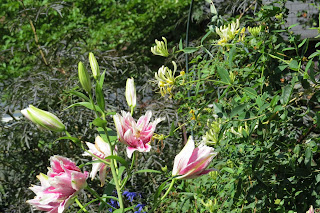 Rose lily 'Thalita', Honeysuckle 'Scentsations' and Black and blue salvia.
The Rudbeckia even seems a little shorter this year. That tells me that the water situation is not so good.  The bees do appreciate all our watering efforts too. 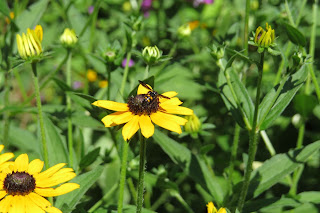 Rudbeckia 'Tribola'
It is amazing how Hostas keep throwing out those blooms in the dry spell. Lilies in any form just keep on blooming. 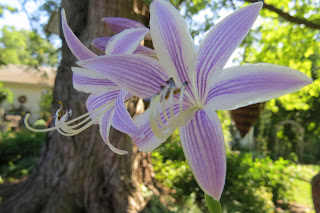 Hosta 'Curley Fries'
Skip over to Carol's blog to join in on the Garden Bloggers Bloom Day. Show us what you have now and/or just visit all the people sharing their blooms.


Posted by Lisa at Greenbow at 5:03 PM 24 comments: Links to this post

It is one of those chores that one puts off as long as possible. It isn't that it is a difficult task but slinging pea gravel over paths certainly looses any glamour it might have had in 90 degree weathers.
Not only that I chose to complicate the matter somewhat with a bit of a change of scenery. 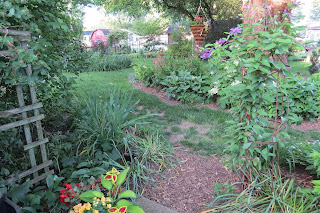 All of that strappy foliage equals daylilies that doesn't get enough sun to bloom. 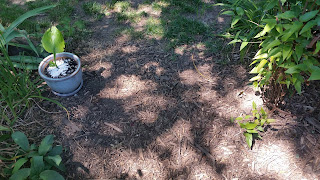 Plus under that pile of mulch is a round stepping stone, I think. It has been a long time not seeing the light of day. 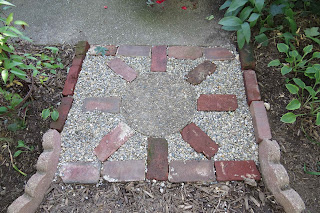 Yes, stepping stone found. Since I had a pile of brick and pieces too I decided to try to jazz up the single step a little. I do like my sun pattern or as a friend of mine calls it a star. Either way it looks better than a pile of mulch. 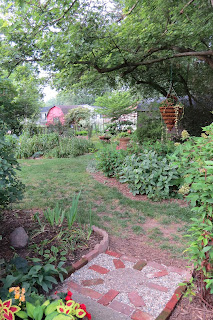 With the strappy foliage moved away and some small hostas planted on both sides of the step it is a more inviting look. 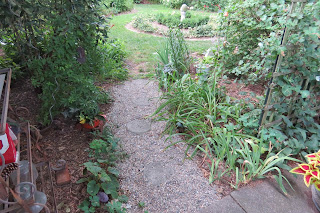 On the east end of the patio these stepping stones were alright in the pea gravel but there again the daylilies didn't bloom this year. So out they came. 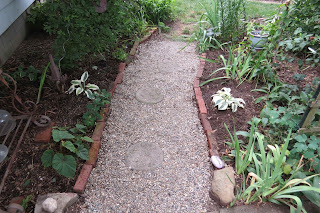 Brick edging went as far as the bricks lasted. I wanted hosta for here too. I went to the local nursery to see if they had an interesting hosta that I liked and I didn't already have. Sure enough they had 'Blue Ivory'.  It was a nice fat plant so I chopped it in two. One for each side. I took out strappy plants and other plants that had self seeded in the area. 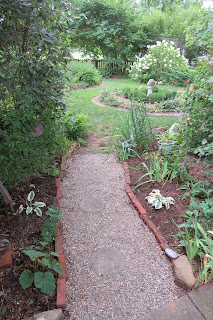 So nice and neat. The hosta is a color echo of the hydrangea in the background. Along this path are also some white asiatic lilies which are finished blooming. I think I will like this better. 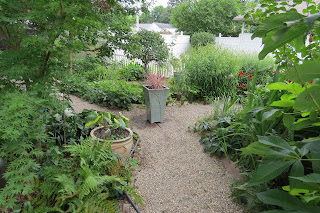 At the opposite end of the patio the path that goes off to the West and then splits got it's fair share of pea gravel, and I have a confession to make.

While shopping for the hosta I saw this planter. Of course it was on sale so...I couldn't resist.  I also picked up this Pennisetum 'Fireworks' to go into the planter. How could I not??? 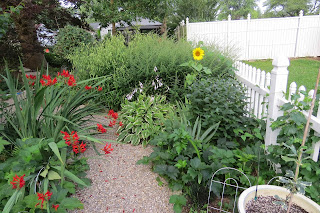 I will leave you with this view of the Western most path in the garden. Not a view I often  show. You can see in the right foreground the tiny variegated Oak tree I bought lately. I had to put it into a pot so it can grow tall enough that the rabbits won't eat it before planting in the garden.

Have any of you been braving the heat to do any projects. ??  Do share.
Posted by Lisa at Greenbow at 1:25 PM 25 comments: Links to this post 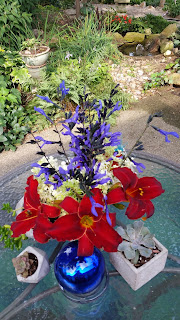 I hope everyone has a safe fun day.

Posted by Lisa at Greenbow at 11:26 AM 6 comments: Links to this post