Dawn who is in Austin has a beatiful Christmas surprise in her garden. I won't tell you what it is after all it wouldn't be a surpise to you then. I will show you what is going on in my garden this christmas. My Hydrangea, Nikko Blue, is setting some buds. This is good but it is unfortunate in that they will be frozen off before spring. 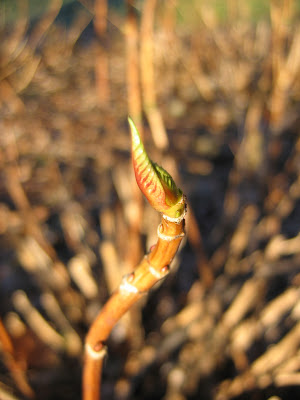 This seems to happen year after year. My hydrangeas set buds and the get frozen off. I haven't had a good bloom from them in several years. I just don't know what to think about this. As you can see in this photo this bud is about frozen off and there is a tiny bud a little lower that is forming. 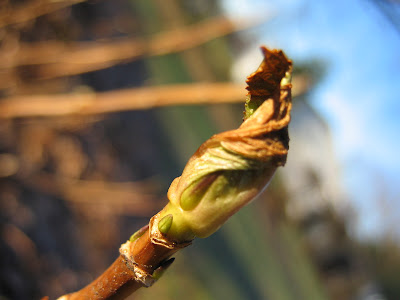 There are quite a few buds lower on the branches. I hope some of them survive the winter so I will have some blooms this summer. This past summer I was lucky to just have them survive with the severe late freeze we had. They only grew to about half the size they normally get during summer. I can hardly wait to see what happens in the garden this coming spring and summer. It is a feeling like the anticipation of christmas gifts. What will I get??? 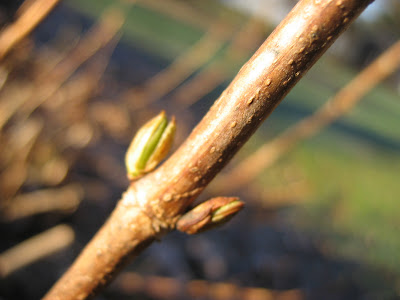 In the mean time I am like Kim looking for some greens and reds in the garden, some kind of life. I am not totally disappointed. The only white we had at our christmas was the heavy frost that was everywhere. The frost was pretty while it lasted. We had such a sunny day. 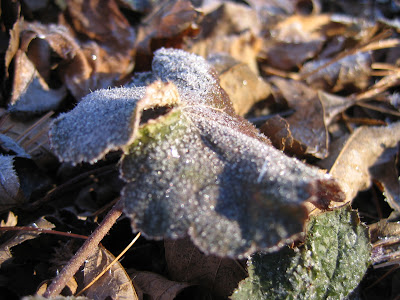 This ivy has petite leaves, a bit of the green with varigation of white and some pinkish red on the edges. I don't know what kind of ivy this is. I bought it several years ago as a filler for a pot. At the end of the season I plopped it into the ground because it was so pretty and I thought it might last a little longer out of the pot. Well, lo and behold it has taken. It grows at the base of the maple tree where ithas formed a clump and is making its way up the base of the tree. It appears ais happy as an ivy could be. One of my happy little surprises. 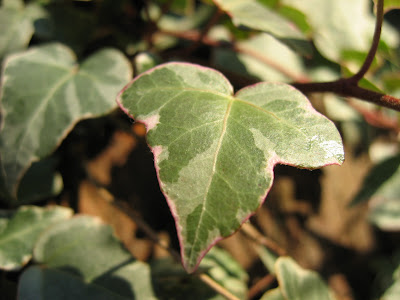