Out of the Garden IV

We had a most beautiful winter day to be out birding today. The sun was shining and the temps were in the double digits. Just wonderful. To greet us when we arrived in the area where we bird was a small group of Hooded Mergansers. Here you can see a male following behind two females. You can also see where the ice formed when the river was up. The river has obviously fallen a couple of feet. 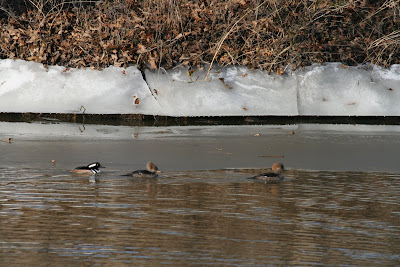 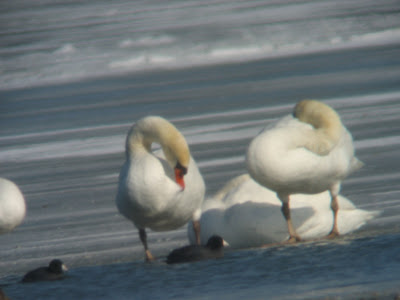 I must say the raptors were what gave the most intersting show today. The Bald Eagles appear to be on the nest already. I know the past couple of times we were by the nest they were busy remodeling. Today it appears that the female is on eggs or at least seriously thinking about it as she was scrunched down in the nest and didn't move as we stood there for several minutes observing the nest action. The other Adult was sitting in a tree nearby. 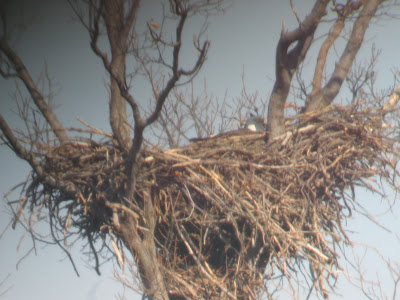 The other most interesting thing that we saw was a young Red-tailed Hawk standing in water. I wish it hadn't been so far away. It appeared to be fishing at first. It stood in the waters edge watching the water. I wish you could have seen it high stepping along the water's edge. 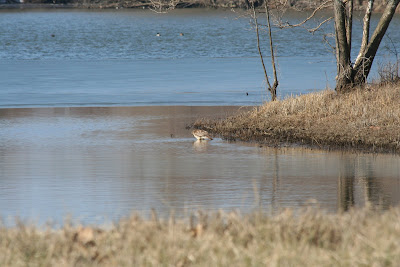 It did this for quite awhile. It finally jumped out of the water into the small trees above where it was fishing. It then hopped back into the water and took a quick bath before departing. I can't tell you how exciting this was to me. I had never seen a Red-tailed hawk even take a bath let alone go fishing. 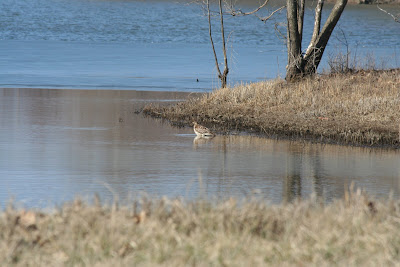 I want to tell you that the sharp pictures my DB took with his new camera. The fuzzy photos I took through the scope with my point and shoot camera which needed its batteries changed. Oh the luck when something great happens.
While we are on a sad note we found one of the tagged (green tag) Ring-billed Gulls dead. No visible sign of injury. Maybe it was too young to make it through the severe cold spell we just endured.
at January 27, 2008