Pedro and the Bird Cage

Several made comment about our bird in its cage. I thought I would give you a little history about this bird and cage. Which came first, the bird or the cage. Well, actually it was the cage. I saw this in an antiques store. It isn't antique but it is 0ld. I have always wanted a parrot. I think they are facinating creatures. Maybe when we begin to stay home more I will be able to have one. Of course the cages now days are made so much larger and sturdier. This cage is purely ornamental.

Being the garden ornament that it has become it has been moved all over this property inside and out. It began its life with us perched on the front porch. I would decorate it for the seasons and holidays.

A funny thing happened one day. A neighbor we know well stopped by to chat. She mentioned the "bird" in the cage. I giggled and told her it was fake. Well, of course right away she said she knew it wasn't real but thought she would tell me that one of the other neighbors that drive by our house often was so upset because we "supposed bird lovers" would leave that poor neglected bird on the front porch in the awful heat we had been having. I about died laughing. We have had more fun telling that story over the years. Just goes to show that your neighbors are probably watching you whether you know it or not. 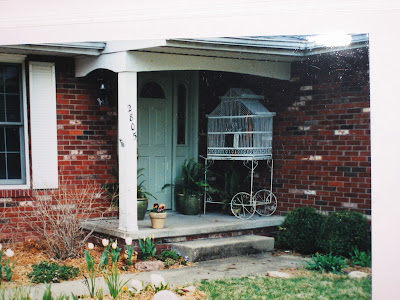 As the years went on the flocking wore off the parrot revealing a bubble gum pink body. UGh I threatened to throw it away but my DB came to the birds rescue. He has kept the parrots feathers preened with various colors of paint. He even replaced his eyes one year. A parrot has to keep an eye on the neighborhood ya know. He has a name too, Pedro. 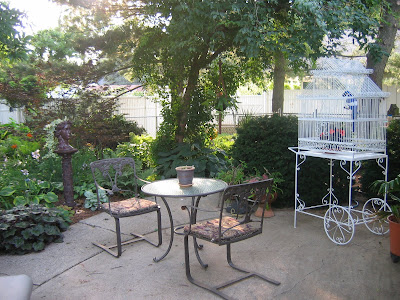 Pedro gets moved to various places in the garden. He is quite portable with those cute little wheels on one side of the cage. If holes develop in a flower bed the cage is placed there for awhile until I decide what might go in that spot. He keep a mighty keen eye on things in the garden. If you missed him at the Garden Watch you can click here and have a closer look at him. 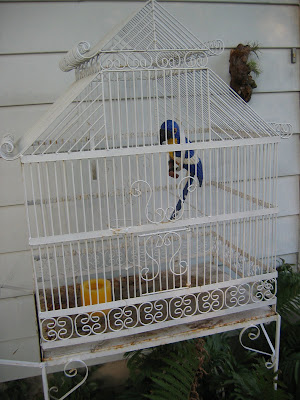 His latest perch, as of last summer, was on the back of the patio right by the back steps. I found that I could place candles in here during patio parties and have a nice ambiant light.
I don't really like it here though because it blends in to the white siding of the house. So this summer I will either paint the cage a different color or move it. Most likely I will move it because I really like it being white. The curls and swirls of the wire cage show up.
I know it shows up well enough because we got new neighbors and soon after they moved in the lady got up the nerve to ask if Pedro was real. She said her daughter was dieing to come over and "meet" the parrot. She was also very disappointed that he wasn't real. I have always heard that parrots are real characters and Pedro lives up to the reputation.
Pedro will definitely get a sprucing up this spring since he is such a celebrity in the neighborhood. I wouldn't want anyone to think we would mistreat him.
We have to tell everyone where he is if they come by when Pedro is getting a make over. Especially one particular friend that always notices Pedro's where abouts. Hmmm I wonder if she could be the culprit that gifted us with our charming parrot??
at January 29, 2008