Reason number one is the lovely little American Goldfinch. These beautiful lemon yellow birds that are often called Yellow canaries by some, they just love the seeds. Maybe that is where they get some of that yellow color, from injesting some of the pollen from the dandelion. Nahh... just kidding there. A little garden fairy told me to say that.
The birds work so hard eating the seeds. They pull them from them from the cluster, waller them around so the seed part is in their mouth then sever the fuzzy end off and chew up the seed. It wears me out just watching them. They do so enjoy them. 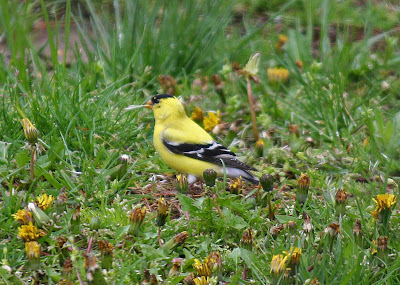 The second reason is the Lark Sparrow. This colorful sparrow looks like a brute while munching alongside of a Goldfinch or Chipping Sparrow. It measures at a whopping 6.5" long. A Goldfinch is 5" and a Chipping Sparrow is a mere 5.5" long. 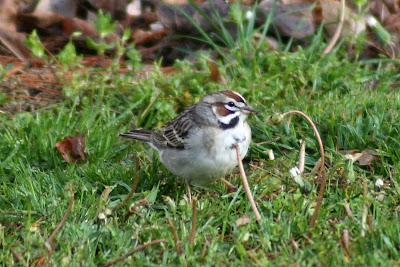 The Lark Sparrow is a bird that is on a watch list for Inidana. They used to be common but are no longer thought to be so. The State Biologist likes to hear about areas where they are found nesting. Luckily we know of 4 places in Knox County where they nest.
So if your neighbors complain to you about the dandelions that are popping up in your garden you just tell them that you are helping at risk wildlife by leaving them in the garden. 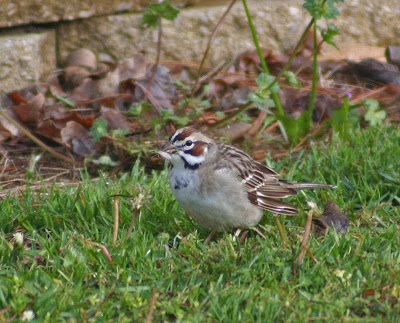 Not only do the at risk birds like dandelions other birds, such as Indigo Buntings , White-crowed Sparrows and most other seed eating birds eat those seeds. Bees who are having a difficult time in early spring finding pollen love those blossoms too. So have a heart a leave a few for the wildlife.
My Dearly Beloved took these pictures for me. He had a difficult time getting the picture with the fuzzy part sticking out of their mouth. Especially with them so far away from where he sat. Thank you Dear.
at April 29, 2008