A fellow gardener asked me "Do you have Cardinals in your garden?" Well in answer to his question I thought I would post about the family we have in our garden this spring. Right after my folly (this is what I call my forsythia by the side of the house) stopped blooming I was going to prune it back but I was stopped with trimmers in hand by the sight of a female Cardinal sitting on a nest in the back of the bush right against the side of the house. She flew off and I got a picture of the young. As you can see they were quite small here. It wasn't too long when I heard them out and about in the garden. I didn't see them for some time because the parents were keeping them hidden in the bushes around the house. 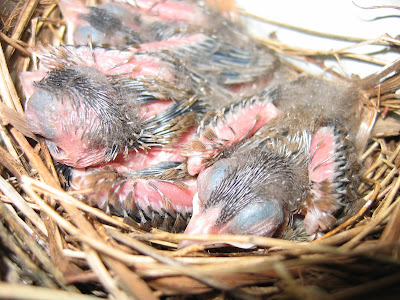 Finally a few days ago, on a cloudy day I spotted one of the little ones sitting in the Serviceberry tree calling for breakfast. The young look a lot like their Momma. As they age you can tell a young cardinal by the color of their bill. Their bill doesn't turn that orangy/red until they are mature. 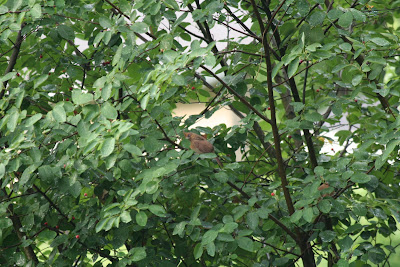 I was delighted to see that the Cowbirds didn't find this nest. I thought that maybe only one chick had survived when Dad came in with food and started feeding the little beggar. I couldn't see any other chicks. 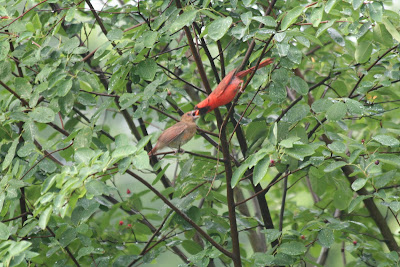 Then all of a sudden another appeared with its begging wings on. Dad had plenty for the second one. They sat in this position for another feeding. I tried to creep in closer to get better pictures. That didn't work so well. 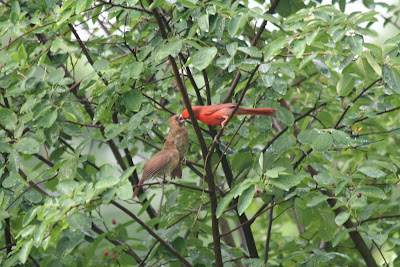 Dad gave me the evil eye and then told his young to get back into the thick of the bushes which they did. I was just delighted that I got to see the young being fed. The male cardinals are such good fathers and husbands. First they make sure the female is fed. Then when the young are out of the nest they make sure they are fed. Since I didn't see the female while all this is going on I figure that she is on a nest or building a nest someplace else since this is what they often do. These parents are a great team for making families. 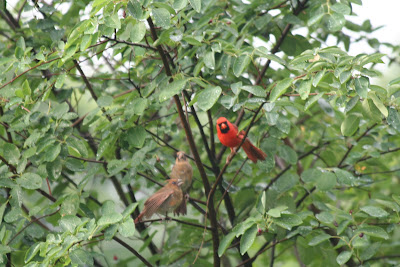 Email ThisBlogThis!Share to TwitterShare to FacebookShare to Pinterest
Labels: Cardinals