The annual Christmas Bird Count in Western Gibson County in Indiana where I bird was held yesterday. Yes, during that awful abnormally cold conditions. We were out from 5:30 a.m. until 7 pm. I really shouldn't say out, we were in our car for most of the day.

Despite a constant wind with gusts up to 29 mph and wind chill temps as low as -11F we braved the weather and saw quite a few good birds. We figured it would be a birdy day with a sunrise looking like a big bird was coming up with the sun. Can you see it in the photo below? That cloud looks like a big eagle soaring about. We did have 5 Bald Eagles during the day. There were 2 adults sitting near their nest. They usually start doing this around this time of year. The rest of the Bald Eagles were young, first year, birds. 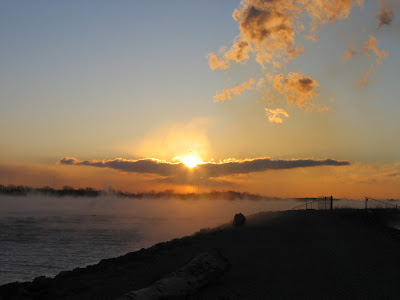 Of course out on the lake it was difficult to count birds when you look out and see this. 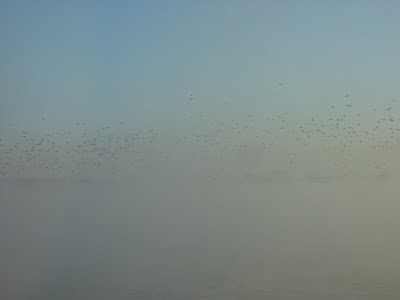 The steam on the lake made it nearly impossible to see all the ducks that were congregating on the lake since this water was the only water within miles that wasn't frozen. 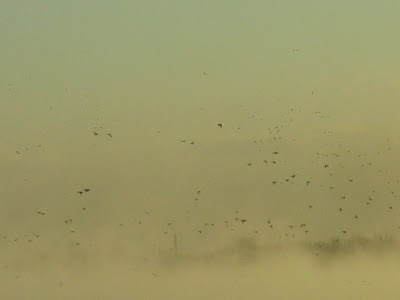 Occasionally there would be an open window of clear enough that we could scan the thousands of ducks. It was a little easier when they went to the surrounding fields to feed. Mallards dominated the flocks. 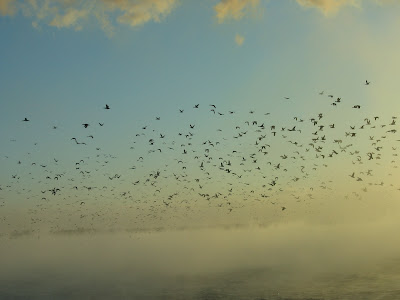 I won't bore you with all the details but suffice it to say we were pleased with the results since the conditions were arctic. It was most appropriate that the Snow Buntings were still on the break. This weather probably made them think they didn't go far enough south for the winter.

Highlights were, the Whooping Cranes were still here, we had two species of swans, Trumpter and Tundra. Falcons were well represented, Peregrine , American Kesteral and Merlin. Close to the end of the day we were saying that no CBC would be complete without an Owl. We were pleased to find 3 Short-eared Owls as our last bird of the day.

This will be one CBC that will be remembered for some time due to the weather. Dust and debris was flying about more so than the birds. It took two people to close some of the gates we had to go through and the steam didn't ever fully disapate from the lake surface. It just makes you wonder what we missed.

I hope you all were tucked in safe and warm this weekend and if I don't get back here the next few days... Have a Merry Christmas.