I must say, I had the most different, interesting day today. I got to do something I have never done before. This sky might give you a hint. What does it bring to mind? A horseshoe perhaps? If it did make you think of a horseshoe you are getting warm, and I don't mean because it was nearly 90F today. 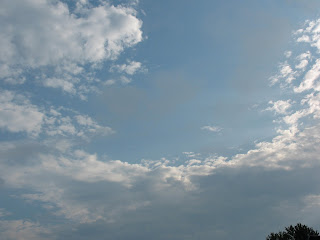 My DB took me to Colts Training Camp to watch the Colts football team get ready for the new season at their place of practice in Terre Haute, IN. 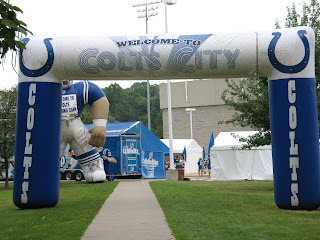 I must say if you aren't a football fan you would have been bored to tears here. I, being a big fan of the Colts, was thrilled to go. I didn't quite know what to expect. So we hoofed it over to the practice field to watch all that goes on. 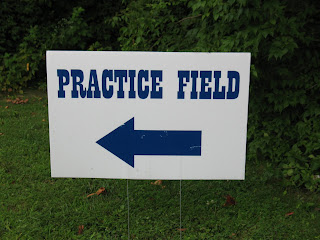 On the way I did have to stop and admire the beautiful stand of Iron Weed and Jeruselam artichokes that were blooming along the edge of the tree lined creek. The trees are what kept us cool in the shade while watching the practice. 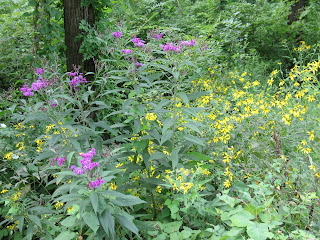 There were a good number of fans there. Some of the very young got their photo taken with "Blue" the official Colts mascot. The line for autographs was quite long. People line up way before practice starts at 8:30 a.m. to get the autographs of their favorite players. 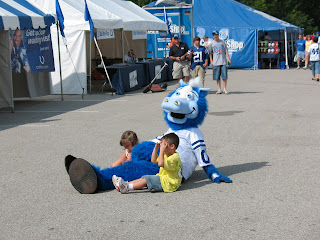 I don't know how official this fellow (below) is but I can assure you he was a very serious fan. He stood the entire time during the practice in his very warm get up. He also posed with any fan that wanted their photo taken with him. He is also seen at every home game I hear. 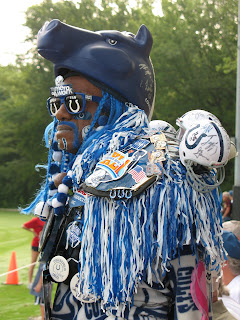 The players were quite close even though my photos don't make it seem that way. It was interesting hearing what the coaches said to the various players. Instructing them on technique and routine. The big camera in the sky was filming all of it. There were actually two of these big towers filming the practice. 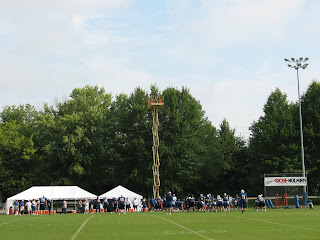 The quarterbacks had their routines to run through together. They split the different players up together to practice the different plays. Then they would have little skrimishes. I was amazed at how they came crashing together and very few actually hit the dirt so to speak. The football field had grass on it that looked like a golf green. 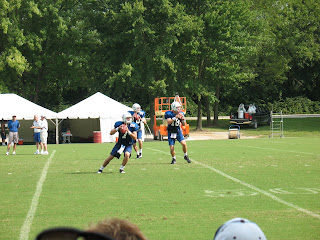 I would say that if you ever get a chance to go watch your favorite team practice you should do it. It is fun. The crowd gets into the repetitions by ooing and awwing over good catches and runs. If it is like this set up there are different things for the kids to do, like a slide and wall climbing. Of course there is some serious fan shopping that can be done.
Heck if all else fails just people watching is amusing in a situation like this. People know they are among the very devoted fan base and will dress up like you can't believe, such as the young lady that was pregnant and she rolled up her tshirt and painted horseshoes and her favorite players numbers and names on her tummy. I wish I had gotten that picture. I just wasn't quick enough. Actually I think I was in shock. ha... I hope you all had a good Monday too. Have a great week.
at August 10, 2009