Since I don't normally have weather during the first part of February to even consider getting out and about in the garden it is a nice break in the weathers that allowed me to get out and actually accomplish a minor chore or two. 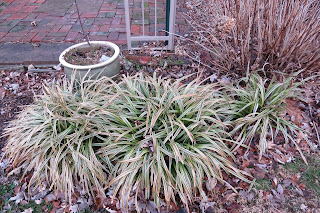 These liropes are winter burned and rather flattened yet you can hardly see the pot behind them. So I decided that I would raise these pots that sit in front of the screen house. 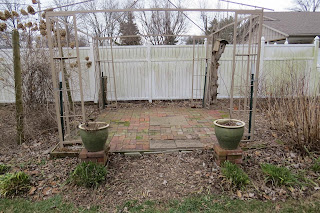 The Lirope is cut back and the pots are raised. They have little Japanese Maple trees in them that I took up from underneath the JM here in our garden. 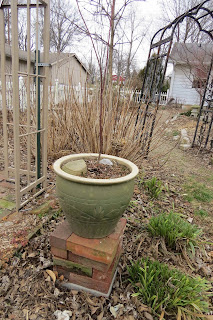 Even though I have put them up several courses of bricks I might have to raise them even more this summer after the Lirope fills out. We will have to wait and see. 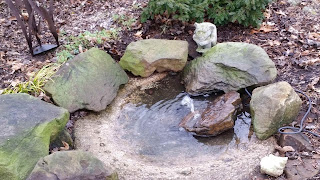 The water feature gave me fits this year it seems. I leave the leaves on the ground around it. I don't remember having such trouble with leaves getting in here in previous years. Maybe I am just more sensitive about the clean out since my foot is inconveniently restricted this winter. Anyway I moved some rocks around. Placing the largest rock (Thank you DB) on the side where the leaves seem to be able to blow over the smaller rocks. Plus the Spreading Japanese Yew was beginning to go over the larger rock. I would rather it didn't so I place a smaller rock into the space where the larger one had been. It seems that the little gargoyle approves of this move. 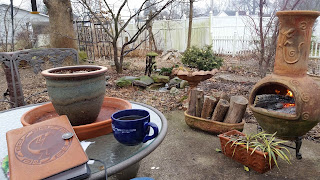 After these small challenges I made a cup of tea and built a small fire in the chimnea and waited for some strong winds to blow in the even warmer air of today to test my rock blocking theory.  It feels good to get out and actually do something in the garden even if it is a small step toward spring.
Have you been able to do anything in the garden?