I was reading in a garden magazine about a well made train garden. The pictures made me long for my own train garden. I have wanted one for some time. I have put off building one due to the fact that you have to run electric and in my area I would have to take up the tracks every winter, store and them. Early spring I would have to fix the heaving of the railway beds and reinstall the train. Not that I am lazy or anything like that but that part of train gardening has put me off. 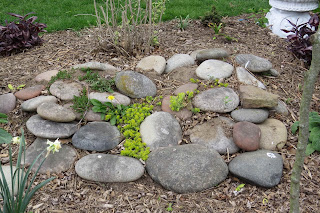 I had this area that is sort of raised and it needed some attention to say the least. My mind got into that creative state.  I could build me a little train area here. What to do about the train part?? I remembered that back in the 80's I got a wild hair and collected a what amounts to a colony of Wood Spirits carved by Tom Clark. Each Wood Spirit had a name and story, all of which are well done. I haven't had a place to display them  in the house so they were in the attic collecting dust. There was a train in that collection. YES!! 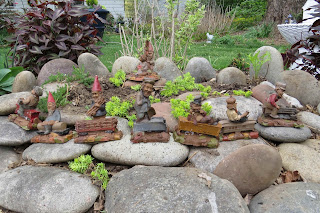 Here they are. All of these figures  have names, stories and jobs on the train. All I have to do now is to add some more plants. 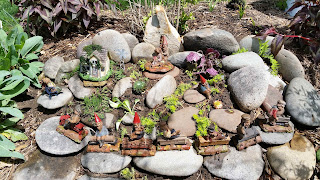 So I have more plants in there now, more Wood Spirits for the train people to visit. There will be more tweaking, planting, thought and growing over summer to get it where I will be satisfied with this little world. 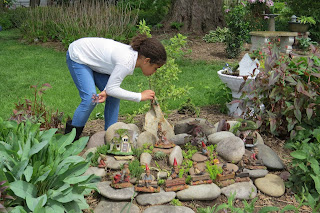 Of course I will have plenty of help with ideas. Between the Wood Spirits, Garden fairies and Garden Helpers it should come around.