We had a mighty interesting day of birding today. The weather was nearly as perfect as you could ask for any time of year. We had a several first of the fall season birds today including this Lapland Longspur. It was in a most unusual place too. It was found on the break in a large lake where we bird. Quite the handsome bird with the rufous in the wing even though it is in its winter plummage. 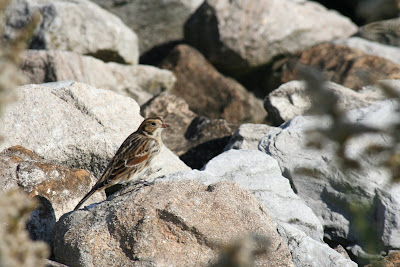 They are normally in fields.We usually don't even start looking for these little birds until mid winter. They can be found in the fields along with horned lark and sometimes if we are lucky snow buntings. I think this one is a male since it has all that dark streaking on its breast. 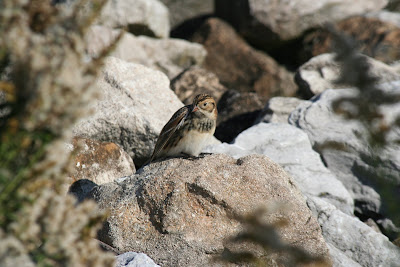 Sometimes they stick around until early spring when they are molting into their breeding plummage. Either way I was happy to see them. 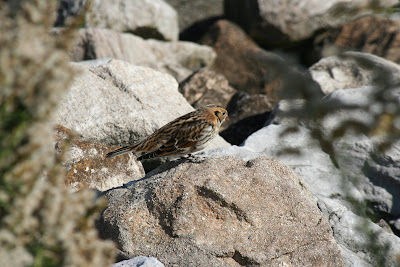 On the other end of the spectrum we had what I think of as late summer early fall birds, a Great Egret. It probably won't be around here after this weekend because it is to get down into the 30's tonight. I imagine it will be heading for warmer climes. 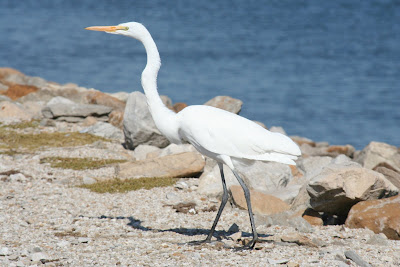 If you want to see the Lapland Longspur a little better you can click on the pictures to enlarge them. I want to thank my Dearly Beloved for taking so many nice pictures today and letting me use them on my blog. I hope you were all able to get out and enjoy the weekend.
at October 26, 2008

Email ThisBlogThis!Share to TwitterShare to FacebookShare to Pinterest
Labels: Great Egret, Lapland Longspur, Out of the Garden