Break In The Weather

All I can tell you is that it was a joy to get out this morning for our daily walk.
It was about 20 degrees cooler than it has been in some time even though the sun was out and it was promising that it would warm up. 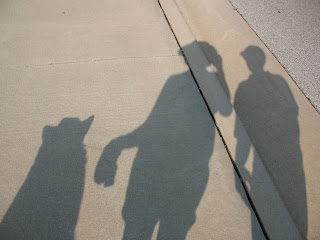 We got a spot of rain last night. With the front that pushed through the temps fell. Out came a few bugs that have been few and far between.
This bumble bee has discovered that one of the flowers on the hummingbird feeder is leaking. He had to run off the yellow jacket that you can see below right. There were two yellow jackets and they gave great respect to the bumble bee. I don't know who found it first but the bumble bee won the flower. 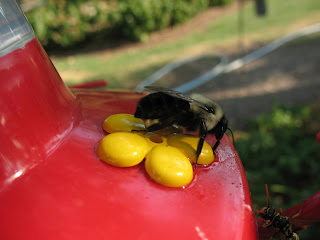 It has been so dry that the yellow jackets have been going to the bird baths for moisture. This is a first in my memory. At our friend's pool there was a big black wasp landing on the water surface like a water strider getting a drink. That was also a first for all of us. I guess this weather takes desperate measures for them to survive. 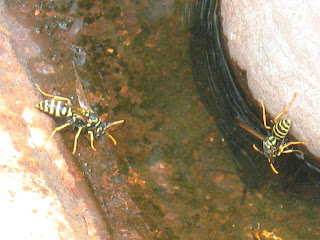 One of the beautiful butterflies had to share its nectar source with Japanese Beetles. 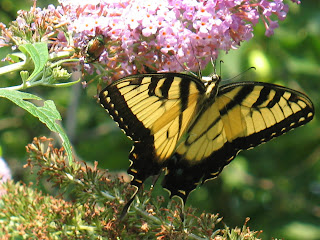 They weren't paying too much attention to the butterfly though. I almost felt sorry for them, almost I said, because they lay their eggs in the ground and right now our ground is so hard I doubt they will be successful. 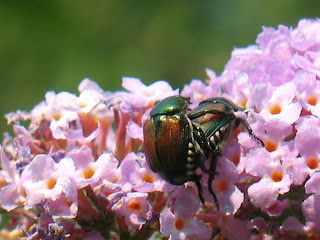 I did find evidence of another ground dweller. This casing of the cicada showed up on the Casa (screen house). The cicadas emerge from the ground, crawl up someplace and leave their casing behind. 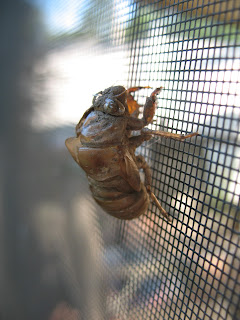 Yes, at least one survived. I haven't heard them calling much though. This is going to be a rough year for them. Of course this wasn't an eruption year for them but I do seem many more than one or two. They normally make such a cachophany of sound you know they are around for several weeks during the summer. 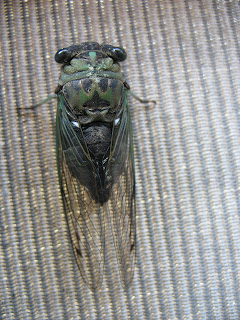 Yes, this will be one summer to remember. Not so fondly though.
One thing that has been nice this summer is that weeds haven't been encouraged to grow much. My DB was thinking it was our outstanding attack upon the weeds that made them afraid to show their ugly heads around here. I had to remind him that I think it was more like the lack of rain that discouraged them. You can see that even with a shot of rain it didn't take them long to begin sprouting. 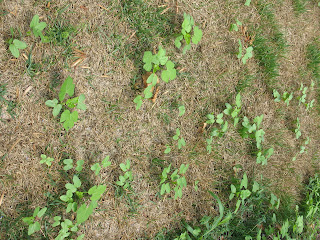 As you see in the picture above the zoysia lawn is not looking too happy but the weeds are sprouting.
Some plants have just given up like this lirope. I am amazed at this. They are so hardy. Other plants like the old fashioned hardy hibiscus nearby just keep on. It isn't as thick or tall as usual yet 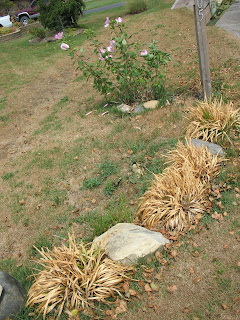 it laughs in the face of drought and so will I. 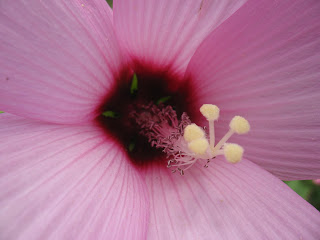 I hope your area has collected some rain and the temps have lowered a bit like here.
at July 09, 2012