This January Garden Bloggers Bloom Day hosted by Carol at May Dreams Garden  is rather berift if you count the number of blooms that I have to show.  My only winter bloom is 'Limey' Begonia. Black Truffles Begonia is just sending up a few buds and the Orchids are budded but not blooming. A little slow for this time of year. 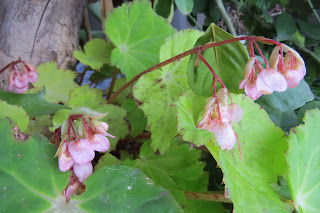 So instead of blooms I have decided to take you on a little snowy tour of the garden to show some foliage that is nice to have during winter. Pam at Digging hosts Foliage Follow Up  the day after GBBD so this will be right up her alley.
I started to go outside for all the pictures but when I put on my boots and started out through the garage thinking since we shoveled the drive I could get a good start there...you can see I was wrong. 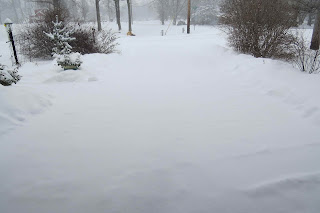 Snow hasn't stopped coming down so my  boots weren't going to be tall enough to stay dry, so we will start here and then move into the  house and look out the windows. You can see off to the left the sweet little Japanese Pine Pinus parviflora. 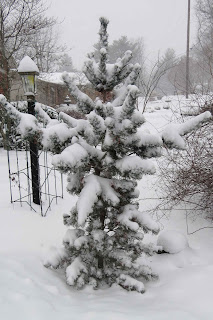 It has a nice shape and must be liking where it is planted because it has grown rather quick. 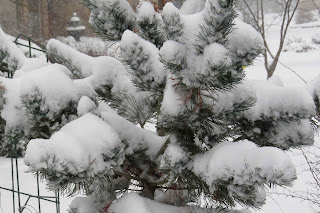 I just love the way the snow collects on it. 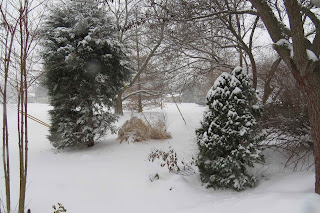 I was going to go around the house but the snow was too high but here you can see the cedar tree on the left  and the shorter Alberta Spruce are also good collectors of snow.
When I turn the other way toward the front door... 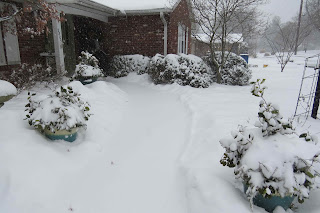 We have some boxwood right against the house and some Holly shrubs in front. The containers I filled with evergreens for Christmas/winter decoration don't look too shabby covered with snow either.
Here is we will go inside for the rest of the tour.
Looking out through the dining room window you can get another look at the Japanese Pine tree.  And no we won't be sitting on the bench out front any time soon. The birds have already stripped the berries from the Holly shrubs which are those empty branches sticking up in the foreground. You can see a dove taking off on the right of the photo and there are several house sparrows and juncos on the snow out by the deciduous shrubs 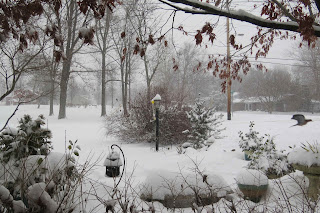 Out our bedroom window is where the labyrinth usually stands. It is covered in snow but you can see around the edges of the laybrinth  shrubs and on the left the queen of the front garden. 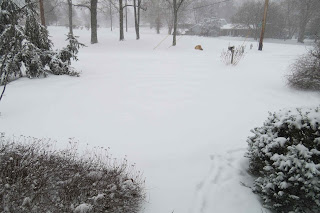 The Weeping Norway Spruce is the largest tree in the front garden. It doesn't get much recognition except from the birds who love nesting in her graceful arms. 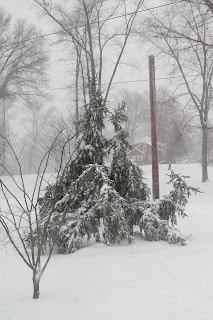 Let us go to the back now. Through the patio doors is where all the action is on this wintery day.
My Dearly Beloved tries to keep ahead of the snow and fills the feeders when needed while Annie perpetually trolls for squirrels and rabbits. We won't be sitting out on the patio for a while. 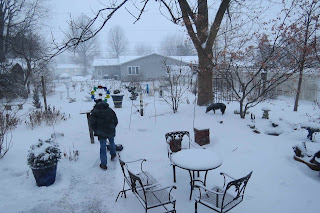 I do have a 'Curly Tops' Chamaecyparis pisifera in a pot. You can see it on the left of the above photo. You can't see how blue Curly Tops is unless you look close. Not as  blue as the pot of course but it is that icy blue that I like. 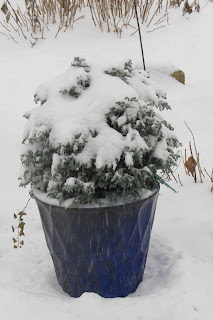 As we look out the kitchen door you can see the yard barn in the distance along with Leather leaf Viburnum and a bit closer a Gold Mop Cypress that has grown up in so much shade that it is only yellow tipped during spring. 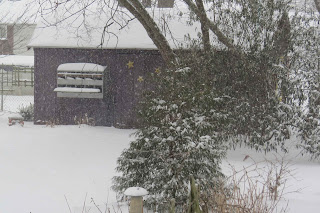 While this shrub, Strawberry Vanilla Hydrangea,  below doesn't have foliage exactly but the left on flower heads collect snow cone tops and I think they are quite cheerful in the snow. 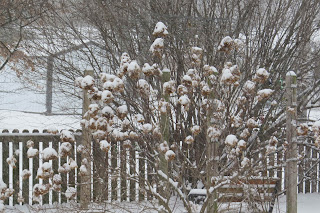 Another  nice shape in the garden is the Hinoki Cypress. It really stands out in the snow even though it isn't very tall. 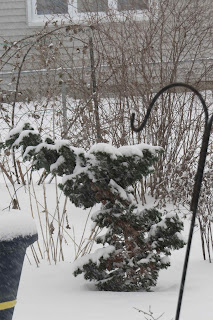 The rest of my collection of smaller shrubs are buried in snow. Such as the boxwood knot. This is how the snow cover began. 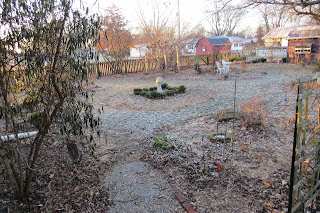 After the first snow it wasn't too bad. 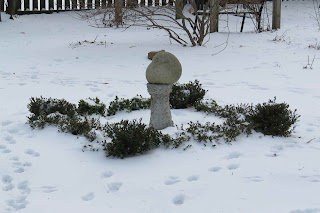 But as the this day progresses the smaller shrubs are doing their best by playing peek-a-boo through the snow. 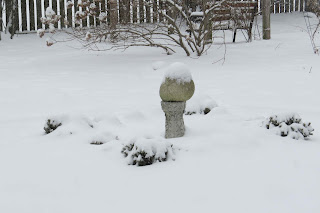 I hope I haven't stretched your patience with this indoor/outdoor  tour around. Have you any blooms to share or any strong foliage standing up to this winter? I would love to see them all. Stay warm and safe.