The group over at Gardening Gone Wild has started a Garden Bloggers Workshop regarding Arbors , or as I like to call them "Bowers" and Pergolas. I had to go back into the old garden journals to get these pictures so you will have to excuse the quality of the first pictures. I simply took pictures of the pictures in my journal to show you the progress.
This all started when we had some huge pine trees that died back in 2001. We didn't realize it at the time but Pinebark Beetles were at work. Anway we had this big empty space in the garden. While I contemplated what to do with this space I set up a little seating area. Since I used the area this way my mind went on to what kind of planting or better yet I wanted a gazebo. I didn't end up with a gazebo since the accountant told me we couldn't afford this. The resourseful penny pincher in me took over.... 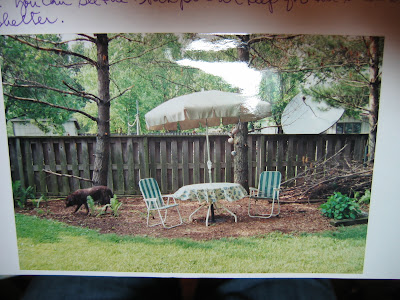 I had all of this raw wood at my disposal and plenty of time so... I started creating. I used two of the dead trees in position. Took a third tree that we had taken down and used it as the right front post. What to do for the fourth?? Well, we have a small electric chain saw so I borrowed a big limb from the big locust tree in our garden for the left front post. The long limbs forming the sides came either from the pines or the maple tree in the garden. Here it is with the top and walls up.
I mulled for some time as to what kind of floor to put here. I considered tiny gravel. I have had that before. However I thought the white would conflict and take away with the more muted tones of the wood. I considered pea gravel then. It would have worked but as fate would have it my niece called me and said they were tearing out a brick patio from their garden..did I want bricks?? 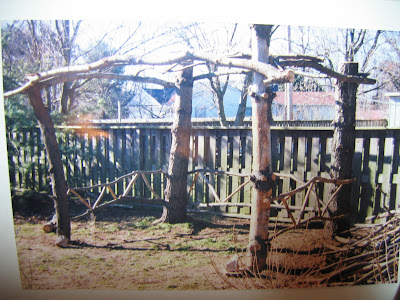 YES bricks!!! That was the answer to my dilemma. I made several trips to and from bringing bricks back to our place. I got enough to make a nice floor in the Bower. My Dearly Beloved was most helpful in putting the floor down. He did most of the floor and has continued to keep it nice and level. 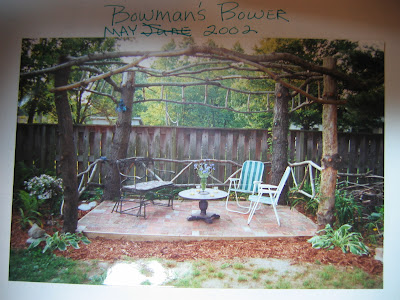 We have had several different vines growing up over and on the bower. The most successful are what are growing there now. The Chocolate (five-leaved Acebia)vine is in the back right corner. On the left front corner is Lonicera 'Late Dutch Honeysuckle'. There is a pass along vine of Cardinal Vine that pops up every summer. 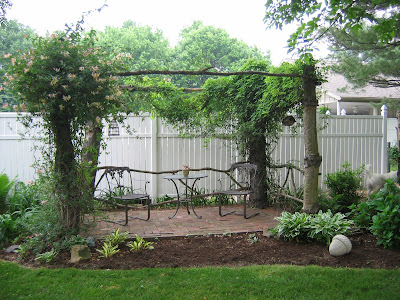 This is how it looked this past spring. Some of the side walls have come down. The roof is gone. After it was built I could sit there and watch the beetles toss sawdust out their holes as they bored through. It took me awhile to figure out what was doing this. What can I say... I'm slow. I am pleased it has lasted this long.
There have been other vines that have come and gone. One of the vines I got rid of on purpose is the Lace Vine. It was just too good to be true. It zipped up the post and across the top of the bower and bloomed prolifically. What's wrong with that you ask??? Well, I saw it growing along a fence line at a park that we frequent. I don't want to be the one introducing a non-native vine that will crowd out natives. /there is already too much of that going on.
With the Bower slowly disintigrating I am having some of those winter dreams of a screened in sitting area. With that WHITE fence behind this area now I think this area calls for a more formal, no not fromal but we shall say 'tame' gazebo. Possibly painted white with screening. Maybe this summer...
at January 17, 2008