Out of the Garden III

When we were out birding Saturday it was a beautiful sunny winter day. We were having just an average winter birding day watching large skeins of Canada Geese then Snow Geese and some White-fronted Geese passing over. Then to our surprise there were these huge white birds going by...but not they didn't pass by they circled around and landed in the pond we were perusing. 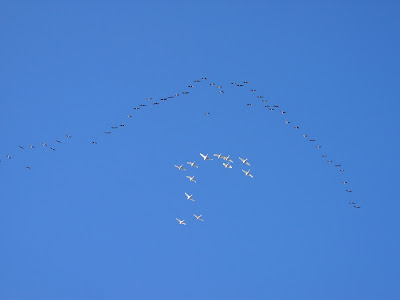 Talk about a winter bonanza. We had 12 Tundra Swans drop in to the pond. They circled around several times trying to decide whether to land. What a splash they made when those big black feet came into contact with the water. 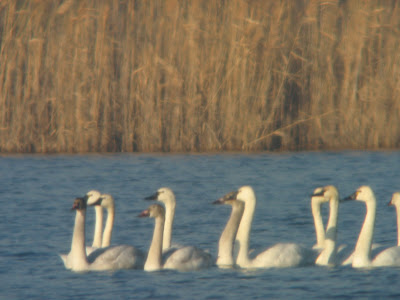 They were quite a ways away from us. I tried to digiscope them and got some fair shots. We tried to make two of them into a Trumpeter Swans because the adult seemed to have a grin patch and a couple of the juveniles had really humpy bills. However after reading that they don't go arouond in mixed flocks and the size should have been noticibly different we decided that they were all Tundra Swans. 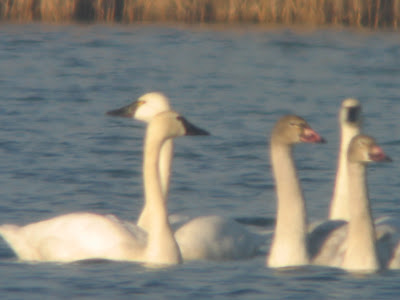 The young ones have a bit of pink in the bill and dark heads and necks. These birds made our birding day. There were also some Mute Swans on this pond. They didn't seem to like the idea of sharing this pond with the Tundra Swans. I wish we could have stayed longer to see if there was a ruckas. The Mutes moved closer to the Tundras while we were there but they didn't do anything while we were there. Mute swans often chase away and harrass Tundra and Trumpeter Swans which is why the Mute Swans aren't welcome in most places. Mute Swans are an introduced species and they are larger and more agressive to our native Swans.

Email ThisBlogThis!Share to TwitterShare to FacebookShare to Pinterest
Labels: Swans