Common and Not So Common Feeder Visitors

The delightful little chickadees were happy that I got out in the snow and gave them some not so frozen seeds. 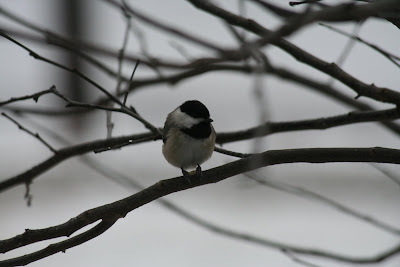 The Carolina Wren was making itself happy going from feeder to feeder picking his favorite seeds for breakfast. 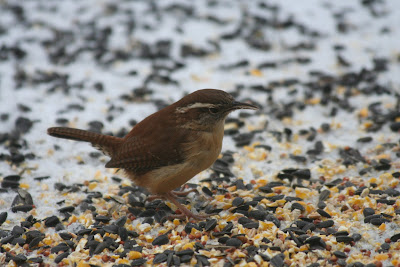 As you can see the Birds are thoroughly enjoying the pine tree that is down. They aren't complaining about it being horizontal rather than veritcal. This just tell me that I am going to get several evergreens planted along this part of the garden as soon as possible. 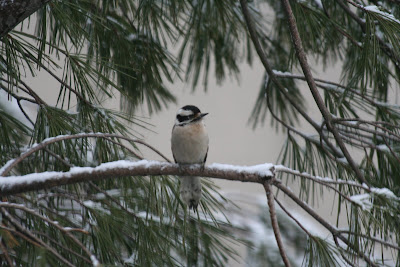 White-crowned Sparrows liked the cover the downed pine afforded. We were just commenting this week that we hadn't seen as many White-crowns as we normally do during winter. Perhaps this winter was too mild to bring them in to the feeds thus far. 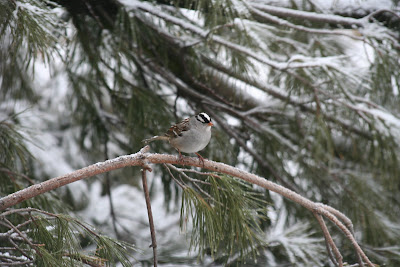 A song sparrow was sitting under the feeder muching away this morning. 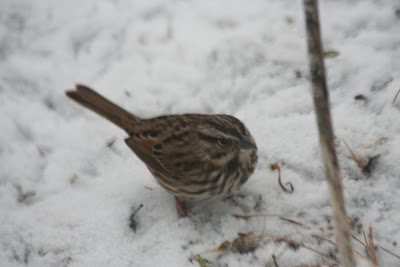 The Dark Eyed Juncos were dining amongst the masses. 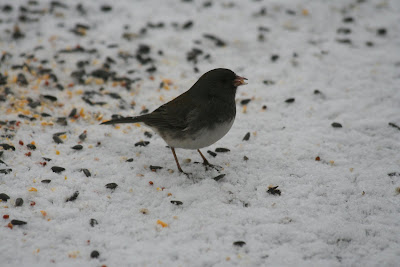 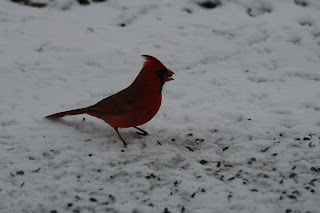 Of course Mr and Mrs Northern Cardinal were getting their fair share of the yummies. The Cardinals seem to be paired up already.

It is such fun to watch them courting. The male sings and carries on so. They feed each other. Such a loving display of affection. 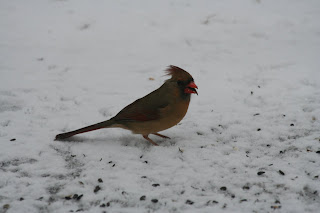 Cardinal is one of the birds that I actually know the latin name. Mainly it is because it is so like their common name. Cardinalis cardinalis. See I told you it was easy.


The only other bird I know the Latin name for is the European Starling. This Latin name is so appropriate for it I couldn't help but to remember it. Sturnus Vulgaris, now if that isn't appropriate I don't know what is. This vulgar bird is somewhat pretty in its winter plummage but it is a nest hole hog and a feeder hog. 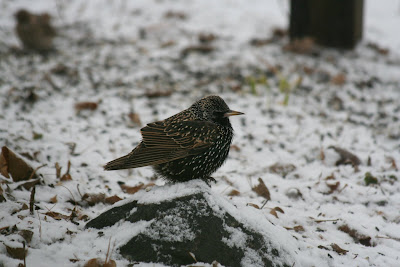 It was a very Sparrowy day here. We had 7 sparrows counting House Sparrow which is actually in the weaver family and Juncos which is in the sparrow family. We didn't get a picture of the American Tree Sparrows. They stayed over by the limb pile this morning.
We had our first Chipping Sparrow of the year. It looks to be almost in full breeding plummage. You can tell it isn't an American Tree Sparrow because it doesn't have a black spot in the middle of its breast and the line going through its eye is black instead of brown. Those are the main differences but there are other more subtle differences. 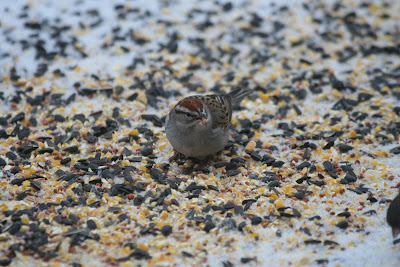 Here you can see the size difference comparing the Chipper to a House Sparrow. The Chipper is a small dainty bird compared to the House Sparrow. We often find that the Chipper lines its nest with Luna's fur. It won't be long until they are singing their songs of "my territory". 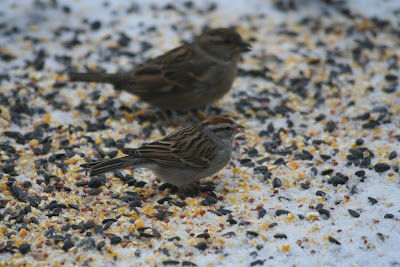 There were three White-throated Sparrows jumping around enjoying a seed breakfast. 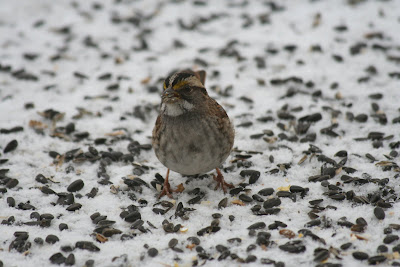 My Dearly Beloved called me to the window this morning to see our latest feathered visitors. The Crow is not a usual garden bird for us. They do seem to nest in our neighborhood somplace but since they are so secretive I have never been able to track down the nest.

We received a skiff of snow last night. I guess this is forcing birds we don't often see into our garden. We watched this group of crows as they waddled around under the feeders looking for someting that interested them. We figured that they were attracted to some natural suet that we have in a cage on the Ash tree where they were perched.
A Cooper's Hawk swooped in on them. It pulled up right before it hit one of them. We think it was just trying to get them out if its hunting territory. Surely it wouldn't have taken one of them. This is why they are all sitting in the tree facing away from the house. They are keeping an eye on the Cooper's. 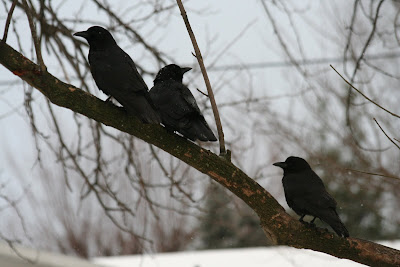 One of the crows turned around to look back at the feeders and it got its tail feathers pulled. I figure it is an adult telling the young one to pay attention to the predator in the tree across from them. A lesson learned. 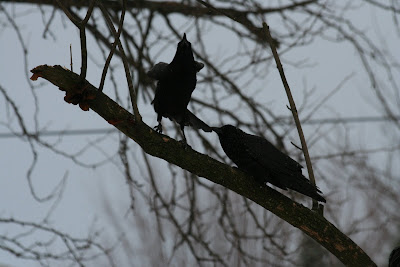 I know I know, enough already with the bird pictures. I can't help myself. This is the first time my DB has used his new camera. I wish there was more light and he wasn't shooting through the windows but at least he has been inspired to get his camera out and use it. After all he got it way back at Christmas. Hopefully by gardening season he will turn his lens to the garden. Plus the American goldfinches are beginning to turn their sun kissed yellow. That should be more inspiration.
at February 01, 2008