Out of the Garden VIII - Great Egrets

This picture doesn't do justice to the sighting we had today while out birding. We were driving along a portion of the Patoka NWR in Gibson County, IN when we looked up and saw a flock of at least 80 Great Egrets descening into a wooded edge of a shallow pond. Now this is a most unusual sight for this part of the country. After all we were in SW Indiana not Florida.

We thought we might be witnessing a migration of some post breeding birds but upon closer inspection we saw that these were adults. Some still in breeding plummage. As a matter of fact the one that was closest to us I tried to take a picture of but as you can see I didn't have much luck. Even the closest one was far away. 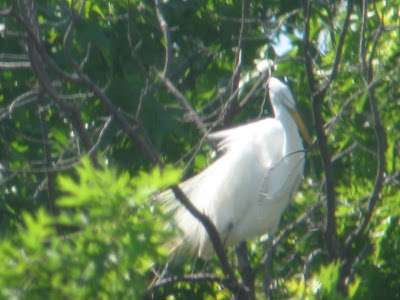 However the picture is good enough for you to see it has a big stick in its bill. I watched as it broke sticks from the tree it was standing in and started stacking them at its feet. You can sort of see its breeding plumes fluffed out as it stands there. When another Egret would fly close this Egret would puff out its feathers and poke its bill at them. It was intent on making a nest.

Previously I had only seen Great Egrets with breeding plummage one other time. Usually I see them in video or in pictures while they are sporting their beautifulbreeding plumes.

We were wondering if these poor birds were flooded out of their rookery someplace along the Mississippi where all this flood water from these parts is flowing. I guess we will never know. It will be fun to go back here to see if the Egrets do indeed nest here.