Time In My Garden

Nan Ondra over at Gardening Gone Wild has written about this months Garden Design question/dilemma. How have you dealt with your garden beds over time? Can you show a project from the beginning to a major change? This is it in a nutshell. Of course she has asked in a much better manner. Pop over to read the about the Design challenge and then post a project if you can.

The north (NW) side of our house is an area that I rarely used to look at. Back in April of 2004 I decided that I needed to do something on this side of the house. There is only one window on this side. So I had a big blank white wall to deal with. I placed a Forest Pansy Redbud tree here with the birdsnest spruce that already existed. The other larger shrub I planted was Sunkist Arborvitae. In between and around went the hostas 'Striptease' and Francis Williams. There are divisions of other hostas, astilbes, Cigmafuga,Iris, Ferns and Daylilies. This is also where there are several native plants like Jack in the pulpit, Mayapples etc. This is how it looked after the initial planting. 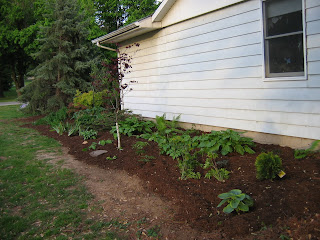 This spring I took a photo of this side of the house. It has filled in nice. It actually could use some dividing of the plants. Ferns had bullied their way into the mesh. The poor Forest Pansy Redbud split last year. There isn't much of it left. I keep thinking I would replace it but as long as it sits there looking good I will leave it. 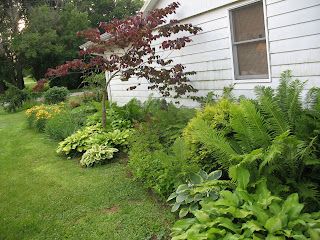 Email ThisBlogThis!Share to TwitterShare to FacebookShare to Pinterest
Labels: Before and After, North Side of the House