During these hot miserable days that are being racked up in the record books it is difficult to be very enthusiastic about the garden. Water water watering is about all that is going on. Looking into my crystal ball would never in a million years would I have seen that my passion for begonias would have been reignited. I must say though I found some beautiful begonias that have taken my mind off the misery of the season. 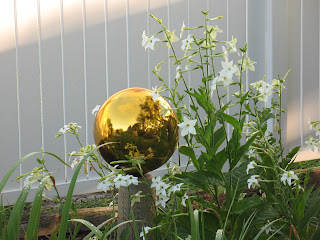 Begonias you say. Yes I say. These are not your mother's wax begonias I am talking about. These are some BIG-leaved rhizomatous begonias and I am telling you right now that my photos don't do them justice.

When I first brought them home I made a big mistake of trying to plant two of them in a pot. Even though the pot was plenty big for the roots it wasn't large enough to suitably display the big leaved begonias. I had to separate these two. 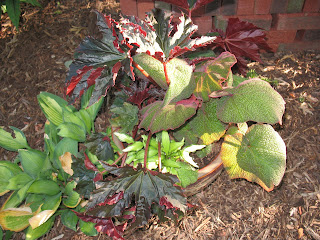 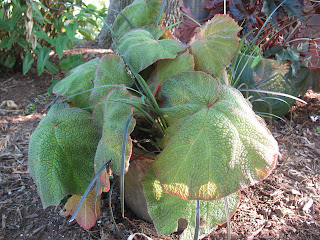 If you look close at them you can see that the leaves are hairy and red underneath. The edges are a little wavy and just look at those hairs. 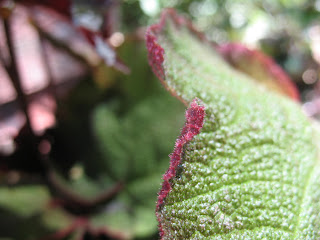 'Bashful Bandit', the one that was crammed in with it has a totally different look. It has huge cleft leaves that are a deep burgandy. (below) 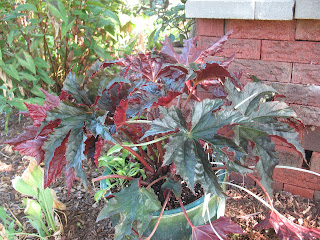 I think my favorite of the lot is 'Cowardly Lion'. It has these huge leaves that are chartruese with deep
chocolate veins running through. 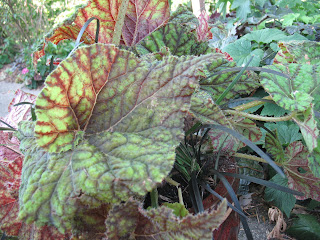 The leaves even seem to spiral in toward the stems. 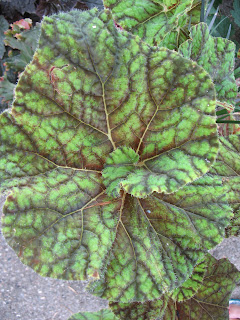 'Black Truffles' doesn't have such large leaves but it has beautiful dark chocolate colored leaves with contrasting yellow/green veins. The back of the leaves are dark red. Yummmmy. 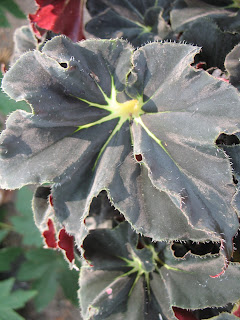 While 'Deco Daddy' isn't as large-leaved as some of the others he is a handsome dude. 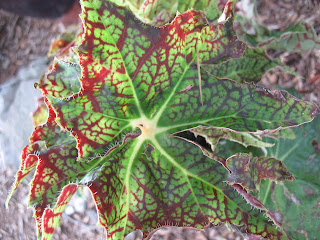 Obviously the 'in' thing in begonias are the spiraled leaves. Even though 'Palomar Whirlwind' isn't quite as colorful as the others I couldn't leave it behind. 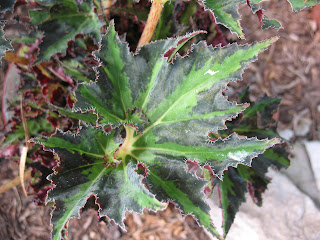 The last in this series I bought is 'Madame Queen'. Unfortunately she has been a little finiky. She didn't like being potted up with another. When I took her out she has been in something of a pout. I think she will come around now that she is in a pot of her own. I sure hope so because her large glossy leaves that are ruffled around the edges are beautiful. 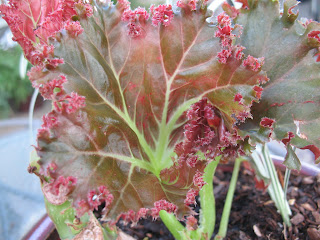 Do I have other begonias? Yes, I just love them. The only bad thing about them is that they all have to come in this winter. I wonder how I will be able to get them all in front of the window with the most light?? Oh well I will worry about that then. Have you a new or renewed flower passion this summer?
at July 29, 2012