The House Wrens that have been so busy by my window have their young moved out into the garden. It must have happened yesterday when I was at work. I was hoping to be home to capture them on camera as they fledged but it was not to be. The little rascals were gone last evening and I found them this morning by the bower. The parents had coaxed them from the Forest Pansy tree pictured here in the background all the way past the new fence to the stick pile. One of the stronger of the fledglings was up in the vines on the bower. I tried and tried today to get a picture of one but the parents squaked at me the entire time I was looking for them. The little ones behaved themselves and stayed hidden. The wren house you see in this picture is one that the House Wrens used as a decoy. There are a few sticks inside. It is funny how they do that. They will put sticks into every house in the garden but only use one to rear their young. They even go in and out of the decoys. Smart little birds. 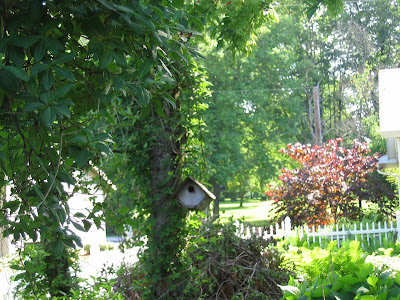 This Saturnalia Sweetspire is just loaded with blooms. I suspect that one of the little ones was in here too. The bush is so thick I couldn't see into it. The parents really got upset when I walked around this bush though. 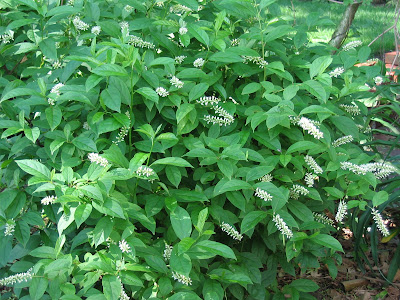 I planted two other Sweetspire bushes last year. Another white one like this one and a pink flowering one. They haven't set buds yet. They weren't as healthy as this one was in the first place. This one I bought with a gift certificate. The other two I bought at end of season sales for $10 each. I think they will recover from their dry mistreated year and will look like this one in a short time.
at June 05, 2008