I just never know what we will find when we go out in the county to do a Breeding Bird Atlas block. This morning was an exceptional morning.  Not because of the birds that we saw, even though we did see some sweet birds.  What was so exceptional is that I found a Snapping Turtle laying its eggs. I have read about this before but had never seen such an amazing sight. 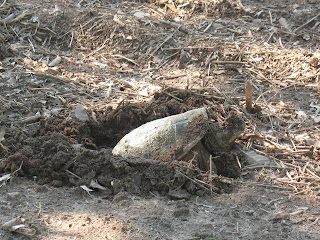 As you can see she had to dig a big hole to lower her large body into.  We stayed and watched for about thirty minutes. I could see her do a shudder or two then she would be quiet. 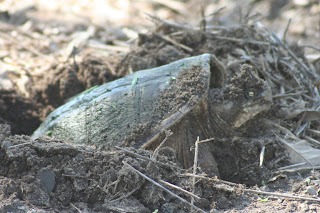 Her clear yellow eye was focused on her task. She must not have been at it very long because the soil on her head was still damp. The wind was blowing quite steadily this morning. I think the soil would have been dried on her head and even possibly fallen off if she had been there very long. 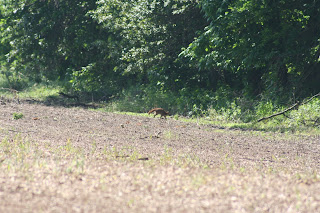 I will be worried about her nest. As we sat there watching her just down the opposite side of the field was a racoon heading for shade. He would make short work of those tasty little eggs no doubt. 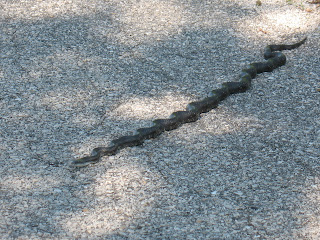 I wouldn't doubt that even a big Black Kingsnake such as this one wouldn't mind a tasty turtle egg or two for a treat.
As my friend Sandy has stated on her blog, you should be careful as you drive this spring. There are all sorts of animals roaming around, place to place over the roads. Do try to make them safe.
I want to thank my Dearly Beloved for being patient with me, sitting there while the bugs tried to carry us away. Taking pictures with his long lens so we didn't have to disturb anyone.
at May 29, 2011