To start of this bloom day I present you with this Exbury Azalea. Normally it has a lot of blooms but it isn't releasing all of the buds at this time. We haven't had rain this month so it is a bit too dry for too many blooms. Plus...the dreaded rabbits at half of this shrub last winter. I am just happy it has any blooms after that treatment. 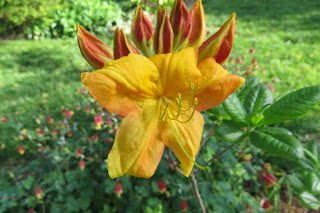 The Buckeye shrub Aesculus pavia  is also reacting to this lack of rain. We will still have a few buckeyes just not as many as usual. 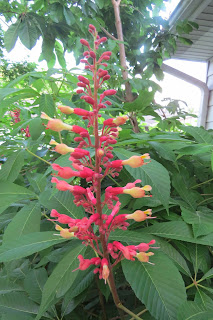 This pretty little yellow Baptisia is not phased by the lack of rain. 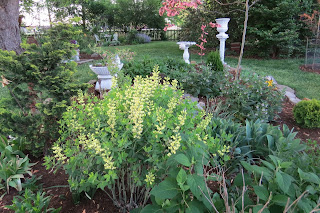 Neither is the catmint. I think this is the best it has ever looked. It may be because it is it's third year in the garden. 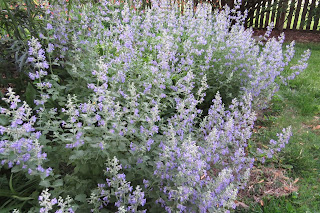 The wind has played havoc with the big white irises this year. Kate doesn't seem to think a thing of it. She has some sparse blue blooms. She really likes more moisture than she is getting. I have threatened several years to pull her out since she goes dormant in August, as in dying to the ground, when we get our normal drought and high temps. 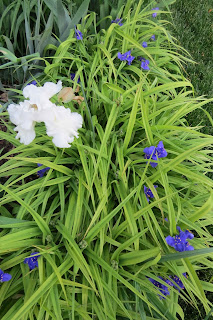 The drying winds have caused the irises not to last so long but it is nice that these white ones edged in lavender have held on for today. You see we still have quite a bit of columbine blooming too.
The first blooming clematis is all revved up. 'Multi Blue' doesn't seem to mind the dry weather. 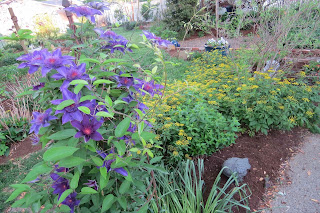 Around on the north side of the house the Jack-in-the-pulpits are blooming and looking taller than normal. I am glad they don't seem affected by the lack of water. 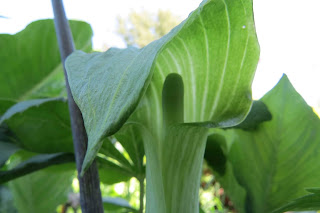 What is Princess Annie doing you as? Why she is watching over the robins. If you look close you can see that these little chicks have a lot in common with the Honeysuckle blooms. 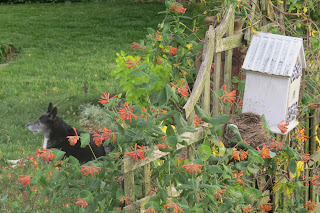 The inside of their mouths are a dark orange while their "lips" are a pale yellow. They seem to be healthy. Mom and Dad are constantly bringing in the food. The chicks sit like this almost all day. 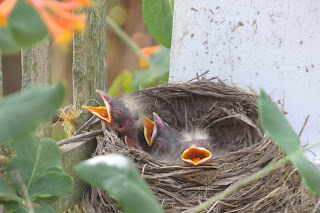 Mouths open. The biggest one can almost launch it's self out of the nest. That would be a disaster. I hope it stays put. Their little eyes aren't even open yet. It won't be long. 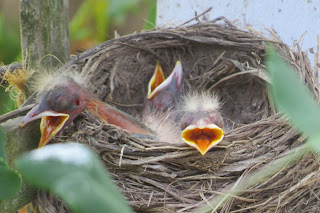 For more blooms from all over flick over to Carol's May Dreams Garden to see what all everyone else has blooming this month.