In a Vase on Monday -

I have found a new meme I want to subscribe to. It was started by Cathy at Rambling in the Garden. I just discovered Cathy's blog not long ago and I enjoy reading about what is going on in her garden since it is in a part of the world where I have rarely gone.

So this is what is in my vase this Monday. It just proves that despite our area being behind in precipitation right now there are a few things in bloom. This vase has more greenery than flowers though. 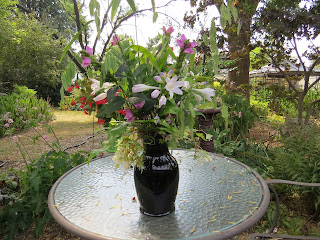 If you look around the edges of the picture you can see how the grass has gone dormant in the paths. I have a hose out to keep things up by the patio watered. The only other thing I have been watering are the few shrubs/trees I planted this spring and the potted plants of course.


I will show you how the vase looks sitting inside where it will reside until all is droopy and wan. 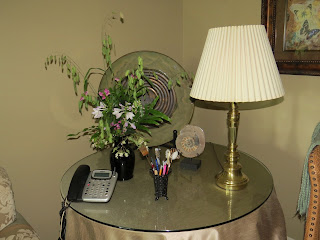 In the vase are fern fronds, Sea Oats, Hosta, Begonia and Turtlehead Blooms.
I hope you all are having a good Monday and you are able to put something In a Vase for yourself.
at September 07, 2015